Originally intended to be a first person roguelike dungeon crawer dating sim hybrid for Strawberry Jam 2017. Unfortunately I ran out of time to finish it because a lot of technical derpiculties cropped up. Also drawing takes a lot of time, yo! But I feel like it would have only been a failure if I did nothing at all. If the spirit of a jam is to learn something I definitely succeeded; Sega Master System bank switching schemes were a particular subject I know more intimately now.

Right now you can cycle through the characters using Left and Right. I didn't have time to make it stop on one naga if you hold it down so you should be a little ginger about it. Use up and down for the NSFW stuff. :9

Each character has their own kinks and interests and in the dungeon you'd have to reach certain trust and affection thresholds to get the "happy" ending.

Annabelle the mage is a history nerd. She is into buttstuff and sibling role play. She doesn't have any siblings herself but she wants to explore these experiences. She feels that such obstacles requires a high level of love an affection to get past than typical relationships and it makes it that much more meaningful. Most people are put off by it though.

Jess the ninja is trying to design her own computer games. She likes dom and sub stuff and particularly enjoys wax play. A very high level of trust is required to introduce pain and suspense into intimate encounters and she believes it is a great way to strengthen a relatinship. She has been hurt by abusive partners in the past though and requires a high trust score.

Bastion is a chess playing figter. Bastion is asexual but he still wants to go into the date dungeon to find a like minded naga to be romantic with. He insists that there is a huge difference between romantic, sexual and even sensual attraction. He is totally put off by sexual acts but he still likes to get all kissy with someone special. It's very frustrating when everyone around him just talk about getting boned.

Trevor is an archer who likes to paint. He is in an open sexual relationship with his bow and likes to wear feminine clothing. He does not believe in animism though many object sexuals do, but he says we all project personalities and moods onto objects and concepts all the time. The spirit of a mountain or river or obvious examples or a soft smiling stuffed animal. For some of us it's all too easy to feel sensual with these objects and to fall in love with them. Many of his partners felt like they were being cheated on because of his attatchment to his bow and told him to abandon it. They are gone and the bow is still around.

I may come back to this in the future, but do feel free to play around with the source code if you'd like!

Even though the game can hardly be called a game, I'd like to thank the following people for their help, advice and insight:

You will need an emulator to run this ROM

The above 2 have been tested on my Win7 machine.

This doesn't want to run in either SMS emulator available to OpenEMU (CrabEmu or TwoMbit). And KegaFusion's macOS build won't launch at all (looks like it's only built for PPC). :(

That's unfortunate! Hmm, I'd send you a physical cart but I didn't get that far in the design yet! I wish I knew more about emulators to help.

A physical cart wouldn't help either since I don't have a Sega Master System. :) Oh well. I'll try it on a Windows machine or something, I guess. 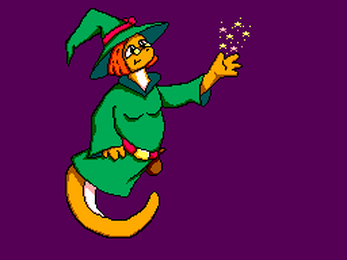